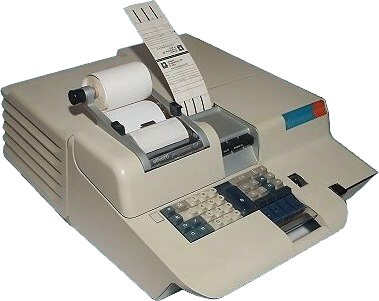 Desktop computer or programmable calculator? To this day it’s a point of contention about Olivetti’s Programma 101 (list price $3,200), introduced at the New York World’s Fair. The New York Times split the difference in its reporting the next day:
Two new entries have gone to the post in the race for the desk-calculator dollar. … The new Olivetti machine, the Programma 101, is closer in nature to a computer than the new Victor device. Like a computer it can automatically run programs calling for a series of arithmetic operations. It can also store or remember these programs internally as well as externally, and through these programs can make simple logical decisions. … The Olivetti device displays its calculations on a paper printout. Its numerous functions allow it to be used for both business and scientific purposes.